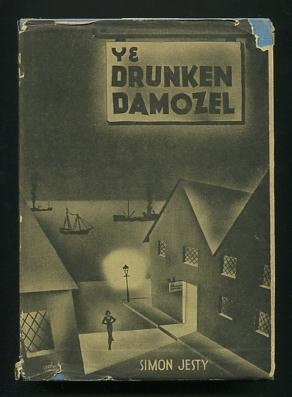 'Ye Drunken Damozel': The Tavern in the Folly

[moderately shelfworn, light-colored staining along front joint; jacket has paper loss at several corners, various small nicks and tears, some soiling and age-darkening to rear panel]. Somewhat phantasmagorical novel about a young fellow, the bastard son of a sailor, who grows up in a grimy quayside London cul-de-sac and falls in love with a "slum-sprite" girl whose lowlife father runs the titular pub. Returning some years later from military service, he finds that she's run off and become a celebrated chanteuse; he tracks her down to Rio, but she denies her younger identity, which of course forces him to spend the rest of the book trying to win her back. The New York Times reviewer, although admiring of the writer's style, was somewhat nonplussed by the novel, calling it "a novel from Mars . . . a strange creation -- terse, elliptical, obscure, peculiarly foreshortened" -- and yet "a rich and varied dish, succinctly portioned out and well flavored with excitement." "Simon Jesty" was apparently a pseudonym, but for whom, I dunno. The author's entire literary output (at least under that name) seems to have consisted of this novel and one other, "River Niger," published in 1935; the only possible clue to his identity is some kind of undefined connection with T.E. Lawrence, who provided a strange sort of preface to the latter book based on an advance reading of the manuscript. Great noir-ish jacket illustration by the great Arthur Hawkins Jr.

Title: 'Ye Drunken Damozel': The Tavern in the Folly

'Ye Drunken Damozel': The Tavern in the Folly