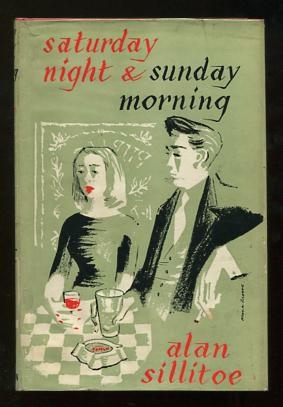 (price-clipped) [light shelfwear, a couple of tiny spots on fore-edge, one-time owner's signature on ffep (see notes); jacket a little edgeworn and slightly soiled, downgraded from NF to VG only because of the price-clipping]. Sillitoe's debut novel, capturing "all the hearty, boozy, earthy gaiety of English provincial life." Basis for the 1960 Karel Reisz film, starring Albert Finney in his breakthrough role. This copy was apparently the property of the English playwright/novelist/screenwriter/painter Derek Marlowe, and bears his purported ownership signature on the ffep -- signed with a fuller version of his name, "Derek W. Mario Marlow," with the additional date "'59," probably the year he bought the book. (While it's admittedly a little odd that this signature omits the final "e" of his surname, given that he would have only been about twenty-one in 1959, and still at university -- and as yet unpublished -- I can think of two possible reasons: (1) that he was actually born "Marlow," and added the "e" a bit later on when he emerged more into the public eye; or (2) that he was just fooling around with different variations of his name and/or signature, in anticipation of future notoriety.)