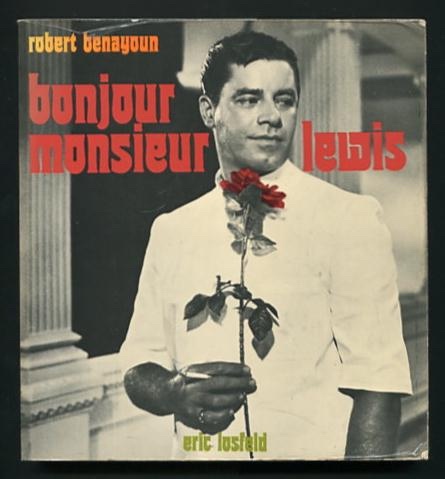 [slight curling to right edge of front cover, slight bumping/corner creasing at outer corners Trade PB (B&W photographs) A comprehensive survey, in French, of the career of the comedian whose elevated reputation in France as a great artist of the cinema has long puzzled many Americans -- and a key work for the understanding of that adulation. The author, a Moroccan-born literary and film critic, was one of Lewis's most enthusiastic admirers, and his book has been described as "a classic example of French intellectuality, when the critical faculty is expressed in the form of a declaration of love and an aesthetic manifesto." Lewis biographer Shawn Levy called it "a cornucopia of praise...part scrapbook, part wacky French theoretical treatise, part exacting factual encyclopedia," and it certainly is the latter, incorporating not only a complete filmography (inlcuding many TV credits) but a discography as well. The book was published the year after Lewis had played a triumphant live engagement (his first ever on the Continent) at the famous Paris music hall l'Olympia -- during which engagement, Levy reports, "a dazed Robert Benayoun lingered around Jerry's hotel for the whole of the comic's stay in Paris" -- but at a time, somewhat ironically, when his career as a moviemaker had virtually come to an end. (This is not to say that he was inactive, exactly, only that none of his post-1972 film as either director or actor is worthy of inclusion with his best work -- with the possible exception of his performance in Martin Scorsese's KING OF COMEDY.) It was said (again by Levy) that Lewis kept a case of copies of the book, which has never been translated into English) in his office. Benayoun also championed other American film comedians: among his other published books were volumes about Buster Keaton, the Marx Brothers, and Woody Allen.