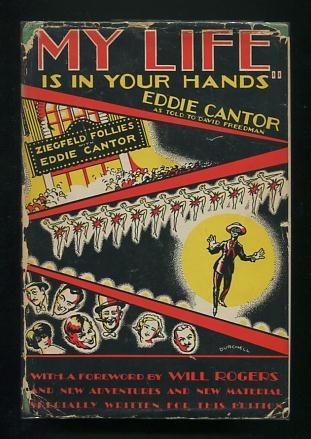 My Life is in Your Hands

By: Cantor, Eddie, as told to David Freedman

[wear to cloth at spine ends, bottom front corner heavily bumped, bottom rear corner slightly bumped, double signature of one-time owner on ffep; jacket rubbed/scuffed, with shallow chipping along top edge, minor paper loss at several corners]. (B&W photographs) The first of Cantor's several memoirs, originally published in 1928, when he was 36 years old and had been in showbiz for over half his life. This edition incorporates "a New Chapter Bringing the Story Up to 1932," although unfortunately it's only nine pages long and contains virtually no information about Cantor's early talking films. (He had made Foreword by Will Rogers, for many years a co-headliner with Cantor in the Ziegfeld Follies. Cantor's as-told-to collaborator, David Freedman, had been a prolific creator of gags and sketches for vaudeville and musical theatre since the mid-1920s, and moved effortlessly into radio (as did Cantor) in the early 1930s. He also worked with Cantor on a number of successful topical humor books during this period, with titles like "Yoo-Hoo Prosperity! The Eddie Cantor Five-year Plan" and "Caught Short! A Saga of Wailing Wall Street," and had a co-screenplay credit on at least one of Cantor's films, PALMY DAYS. I've seen it written (notably on David Freedman's Wikipedia page, but unsourced) that this book was nominated for the Pulitzer Prize in Biography for 1928, but I haven't been able to run down independent confirmation. Very uncommon in the dust jacket, in any printing.

Title: My Life is in Your Hands

My Life is in Your Hands