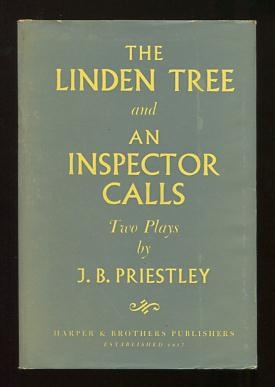 The Linden Tree -and- An Inspector Calls

[solid copy, but with some staining/spotting to top of text block, lighter spotting/foxing on fore-edge and bottom edge; jacket just lightly worn, with a handful of tiny insect-nibbles at top and bottom edges of both flaps]. The very scarce first American edition (albeit printed in England, per the copyright page) of two of Priestley's best-known plays, and in the case of "An Inspector Calls" certainly his most enduring. Adapted as a feature film in 1954, it's also been presented in numerous television and radio versions; out of critical fashion for many years since its debut in 1945 (during which time it remained a staple of regional theatre), the play has enjoyed a rediscovery in recent decades, most notably in a 1992 revival at the National Theatre in London, and most recently a West End revival in November 2016. (This edition appeared a few months after the play had concluded its original run on Broadway, from October 1947 to January 1948.)

Title: The Linden Tree -and- An Inspector Calls

The Linden Tree -and- An Inspector Calls