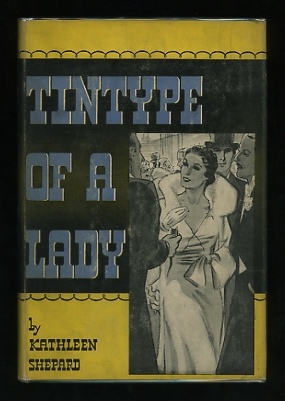 Tintype of a Lady

(price-clipped) [good sound book with a bit of wear at spine ends, light dust-soiling to top of text block; jacket lightly soiled, spine somewhat darkened, tiny chip at top of spine]. Joy, a girl from the wrong side of the tracks, suffers the indignities of her social station but ultimately hits upon a revenge-scheme: she pursues and ultimately elopes with the son of her town's most prominent citizen, then demands a blackmail payment from the old man for her to leave town. Although things don't go precisely according to plan, she does escape the town and proceeds to New York, where she hooks up with a chorus girl named Mimi -- "red-headed, snub-nosed Mimi, who could always make the second chorus row and practically everything that went with it. Through Mimi, Joy got into show business." It was announced in late 1936 that a newly-formed film production company, Sterling Pictures Corporation, had bought the rights to the novel, but no movie version ever materialized (nor, in fact, did Sterling Pictures Corporation itself, which unformed almost as quickly as it had formed; long story there, but not really relevant to the book at hand, so I'll spare you). A couple of other story properties by Kathleen Shepard made it to the screen at about that time, but she herself apparently never went Hollywood.

Title: Tintype of a Lady

Tintype of a Lady