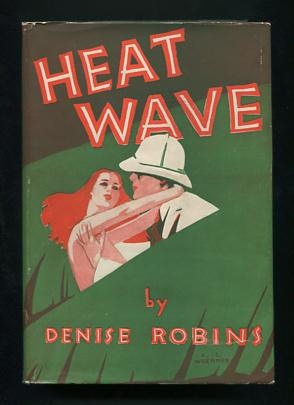 [book is flawless, tight and clean with no discernible wear, vintage price sticker (from San Francisco department store The White House) on rear pastedown; jacket shows just a touch of wear at spine ends]. "A story of the tea-planters of the Malay States -- and their wives." The author, working "with a magic pen and an eye for far countries and exotic scenery, and above all an understanding of the hearts of men and women" -- but possibly one of the worst dust jacket artists of all time -- "has made a thriller which no fiction-lover can afford to miss." Magic pens notwithstanding, the novel's lineage is a little more complicated than that: it was first a play by Roland Pertwee, written and staged in England in 1929, then novelized by Miss Robins; the play eventually made it to Broadway (for a mere 15 performances) in February 1931, at which point it was already in the works as a movie; the New York Times critic even referred to the play's run as "its pre-movie trial." (The same critic rather amusingly summed it up: "Vile tempers, scandal, whisky, tennis flannels, the jabbering natives, a pistol shot, 'you beast' -- all the implements, except military uniforms, are there to the point of complete boredom.) The film version, retitled THE ROAD TO SINGAPORE, was released in October of that year, and starred William Powell and Doris Kenyon; both the play and this novel were credited as its sources. Denise Robins (1897-1985) was fantastically prolific, turning out more than 160 novels, under both her own name and about a half-dozen pseudonyms. The first president of the Romantic Novelists' Association, she was also the mother of Patricia Robins, who has made her own mark in that literary field.