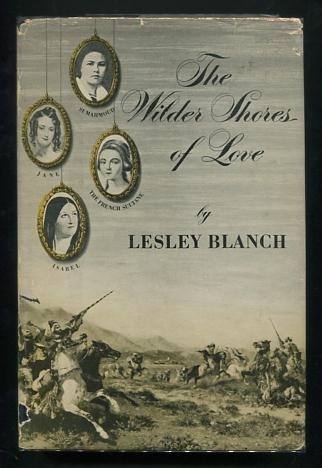 The Wilder Shores of Love

[light shelfwear, slight exposure of boards at bottom corners; jacket edgeworn, various small tears, a little paper loss at top of spine and at top left corner of rear panel, small bits of paper loss at both edges of spine near bottom, large but faint water-stain to rear panel and spine]. (B&W photographs, other illustrations) Joint biography of four nineteenth-century European women who lived lives of adventure, in search of "in the East, glowing horizons of emotion and daring which were vanishing from the West. They were realists of romance, who were able to act out their dreams, and did so, robustly. The four were: "Aimee Dubucq de Rivery, cousin of the Empress Josephine, who was captured by corsairs and flung into the seraglio of the Grant Turk; Isabelle Eberhardt, the chaotic Slav, mystic and voluptuary, who galloped off into the Sahara dressed as an Arab, to die, at thirty, riddled with diseases which were the price of her freedom; Jane Digby, Lady Ellenborough, the beautiful raffish creature [whose] innocent and romantic idealism led her, at last, to the black tents of the Bedouins; and Isabel Burton, wife of 'Burton of Arabia' [explorer Sir Richard Francis Burton], loving with single-minded fury, possessing, through the man, the East she craved." The author, a widely-traveled journalist and fashion editor, was married from 1945 to 1962 to French novelist/diplomat Romain Gary; beginning in 1956, he was stationed for a time in Los Angeles as France's Consul General, a situation that put the couple into proximity to the Hollywood crowd.

Title: The Wilder Shores of Love

The Wilder Shores of Love