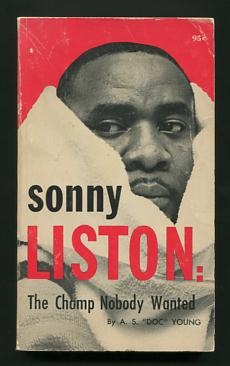 Sonny Liston: The Champ Nobody Wanted

[moderate external wear, a little fading along top edge of rear cover; binding still completely intact]. Trade PB (B&W photographs) An "unauthorized" yet sympathetic biography, by a prominent African-American sportswriter, of the heavyweight boxing champion who took the title away from then-champ Floyd Patterson with a stunning first-round knockout on September 25, 1962. Liston's long ascent to the pinnacle of boxing was fought both inside and outside of the ring, as he had to overcome a hardscrabble childhood which led him into extensive criminal activity (he served a two-year prison sentence for armed robbery in the early 1950s), and his boxing career was clouded by persistent links to organized crime and a general perception that he was an unsavory character. He held the heavyweight title for exactly 17 months, during which his single fight was a rematch with Patterson in which he again prevailed; on February 25, 1964, he found himself on the losing end of another stunning upset, by the young Muhammad Ali (then Cassius Clay). This biography, although it appeared just five months into his reign, appears to have been pretty deeply researched; at any rate, it wasn't until more than 20 years after Liston's death from a heroin overdose in 1970 that another major biography was published. (This book was issued simultaneously in hardcover and softcover editions; the present example is the second printing of the paperback, from March 1963; a scarce book in any printing.)

Sonny Liston: The Champ Nobody Wanted