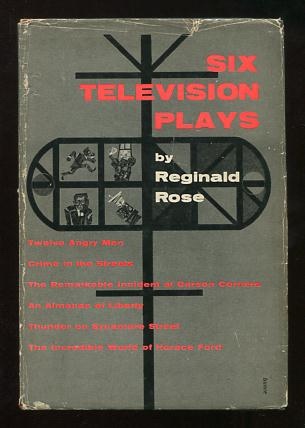 [light shelfwear, tiny white stains to cloth at both ends of spine; jacket edgeworn (especially along spine), small nicks at spine ends and a couple of corners, tiny chip at top of rear panel, slightly larger chip at bottom of rear panel (no effect on text or author photo)]. INSCRIBED and SIGNED by the author on the ffep: "4/19/56 / To Pat and Charlie -- / With best wishes / for a very happy / Tishabov -- / Reggie." Six teleplays by one of the most influential writers of live TV drama in the 1950s, two of which -- "Twelve Angry Men" and "Crime in the Streets" -- served as the basis for notable motion pictures. The other titles are: "The Remarkable Incident at Carson Corners"; "An Almanac of Liberty"; "Thunder on Sycamore Street"; and "The Incredible World of Horace Ford." All but one of these ("Crime in the Streets") were originally written for CBS's famed "Studio One" drama series; "Horace Ford" was later adapted for a memorable episode of "The Twilight Zone." Signed by Author