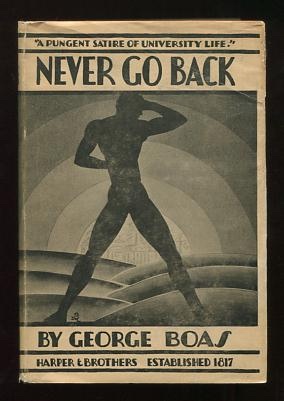 Never Go Back; a novel without a plot

[moderate wear to spine ends, spine slightly turned, small previous owner's signature and date on ffep; jacket somewhat age-toned, shallow chipping to base of spine]. "A pungent satire of university life," the first (and only) novel by the noted American historian of philosophy, who over a long and distinguished academic career (primarily at Johns Hopkins University, from 1921 to 1956) wrote over a dozen books, including "The Inquiring Mind," "The Limits of Reason" and "Vox Populi." Boas received his education primarily at Brown University and UC-Berkeley (earning his Ph.D. at the latter in 1917), and the latter seems to have been the primary model for his novel's fictional "Oralia University" (typo'd as "Uralia" in the jacket copy), described as being 3,000 miles away from the protagonist's New England hometown, and having an ocean nearby -- although the fact that his main character is a faculty member rather than a student would suggest that his experience at Johns Hopkins also informed his satirical outlook. Further paralleling the author's own life, the novel's action begins prior to World War I, and its narrative encompasses his military service in France during the war. Prof. Boas seems to have gotten his autobiographical-novelistic ya-ya's out of his system with this book, as this marked the end of his career as a fictionalist.

Title: Never Go Back; a novel without a plot

Never Go Back; a novel without a plot