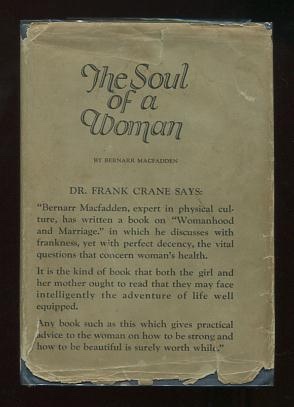 Womanhood and Marriage [dust jacket title: The Soul of a Woman]

[moderately shelfworn, bumping to bottom corners, rubbing to gilt lettering on front cover; jacket a bit tattered, with a number of small chips and other bits of paper loss at edges and corners]. (B&W photographs) A manual covering literally every aspect of marriage, from an author often cited as a forerunner of the mid-20th century exercise gurus Charles Atlas and Jack LaLanne. If ever there was a self-made man, it was Bernarr Macfadden, an avid proponent of good health through exercise and diet (specifically vegetarianism), and above all avoidance of the medical establishment. His magazine "Physical Culture," founded in 1899, provided the seed for what grew into a publishing empire that ultimately included dozens of magazines (including such popular titles as "True Story," "Liberty" and "True Detective," as well as the pioneering photo-illustrated tabloid newspaper the New York Graphic), and also turned out his many, many books on the subjects of health, exercise, diet, child-raising and sex -- always sex. But he did more than simply expound on such subjects as "Virile Powers of Superb Manhood," "Making Old Bodies Young" and "Fasting for Health" (the titles of a few of his dozens of published books), he also put himself forward quite publicly as a physical specimen of the results of his prescribed lifestyle -- including, as you might expect, his rather vigorous procreation: the frontispiece photo in this book depicts him with his then-wife (she was the third of four) and seven of their children. (They would eventually have an eighth.) [NOTE: there is a tear in pages 251-252.]

Title: Womanhood and Marriage [dust jacket title: The Soul of a Woman]

Womanhood and Marriage [dust jacket title: The Soul of a Woman]