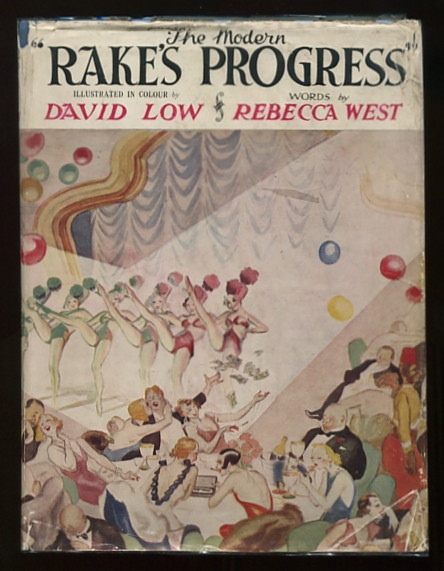 [moderate shelfwear, minor bumping/rubbing to top corners, slight exposure of board at bottom corner of front cover, Christmas gift inscription (non-authorial) dated 1934 on ffep; jacket somewhat edgeworn, small chip at top right corner of rear panel, some paper loss at top corners of spine, small closed tears and associated creasing at bottom corners of front panel, shallow chipping along bottom edge of rear panel; all in all, though, still a colorful and attractive example of the scarce original jacket]. (color illustrations) A collaboration between West, "England's cleverest woman writer," and Low, "the greatest cartoonist in the world," a satirical portrait of contemporary English cultural life -- "night-clubs, the theatre, Fleet Street--and the personalities of each" -- modeled after William Hogarth's famous series of paintings depicting the downfall of the wastrel son of a rich merchant, who diddles away his inherited fortune on gambling, prostitution and all-around spendthriftery. Low's double-page panorama illustrations aren't direct takeoffs of Hogarth's, and there are more of them (twelve to the original eight), but they are similarly crowded with character and incident, and mirror the content of the book's chapters, with titles like "The Rake Gives a Cocktail Party," "The Rake Invests in the Movies," and "The Rake at the End of His Tether." Hogarth's original Rake descended into violence and madness, and in the final painting of the series has been confined in Bedlam; West and Low's modern version doesn't have quite such a grim ending -- the protagonist just gets kicked out of his hotel and is last seen standing in a breadline on the street, as befitting the Depression Era in which the book appeared. Very seldom encountered in the original dust jacket.