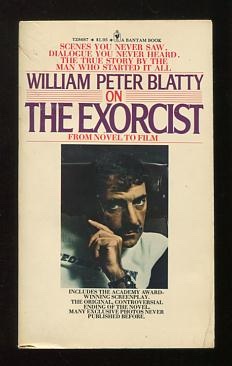 William Peter Blatty on The Exorcist, from Novel to Film

[nice tight book, light external soiling, faint diagonal crease at bottom right corner of front cover]. Mass Market PB (B&W photographs) A comprehensive history of the creation of THE EXORCIST -- novel and film -- from the perspective of the book's author. Contents: a 39-page introduction by Blatty in which he discusses how he came to write the book and how it began to make its transition from page to screen; his first draft screenplay; a discussion of "Why Changes Were Made in the Screenplay" (11 pages); a "Transcript with Scene Settings" (essentially a continuity script for the finished film); full credits for the film. Surprisingly uncommon, given the massive popularity of the movie.

Title: William Peter Blatty on The Exorcist, from Novel to Film

William Peter Blatty on The Exorcist, from Novel to Film