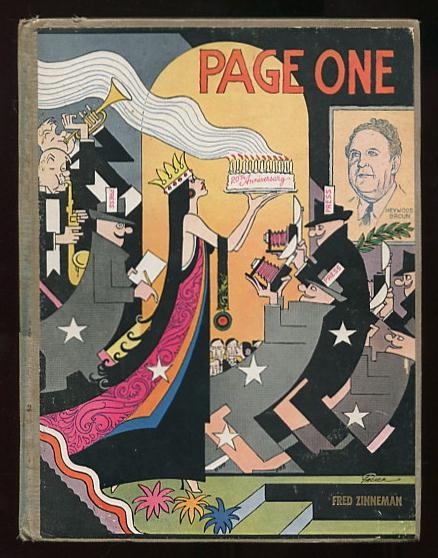 Page One of 1953: Yearbook of New York's Newspaper Men and Women

By: (The Newspaper Guild of New York)

(pictorial paper label on front cover; no dust jacket, as issued) [shelfwear and bumping to bottom edges, some fraying to cloth at top of spine, a few tiny stains adjacent to spine (on both front and rear covers)] (B&W photographs, cartoons, ads, etc.) Commemorative yearbook, issued to coincide with the "Page One Ball," an annual shindig at which the Big Apple's newspapermen (and probably a few women) gathered to make merry, give themselves awards, and generally congratulate one another for being, well, New York newspapermen, at a time when NYC boasted no fewer than seven daily papers. Numerous reporters and columnists contributed short pieces, many of a humorous nature, and quite a few having to do with the vicissitudes of the journalistic racket and/or aspects of New York life. The cover illustration is by Fred L. Packer, and among the cartoonists whose work appears in the book are Milton Caniff, Irving Hoffman, Bernard Seaman, Chic Young, and Virgil Partch (VIP). And of course there are the ads: product ads for cigarettes, airlines, restaurants, liquor, hotels, etc., and also numerous "tribute" ads, mostly from showbiz figures ("Best wishes from Sid Caesar," that sort of thing). This particular copy was personalized (via the gold-embossment of his name at the lower corner of the front cover) for film director Fred Zinnemann, and laid in is a presentation letter to him from Ted Nelson, Director of the Page One Ball; unfortunately, whoever did the cover-embossing omitted the final "n" from Zinnemann's name. The high spirits documented in this publication, unfortunately, didn't quite survive all the way to the end of 1953: on November 28, six of the city's seven daily papers went on strike (the photo engravers wanted a raise and better working conditions), and for eleven whole days readers had only the Herald Tribute available to them for their regular news fix. (NOTE that although the cover illustration references the "20th Anniversary," this would appear to be a reference to the Newspaper Guild of New York itself; I've found no evidence that this sort of commemorative "Page One" volume had been published prior to 1951. In any event, an OCLC search turns up less than a handful of library holdings of this publication.)

Title: Page One of 1953: Yearbook of New York's Newspaper Men and Women

Page One of 1953: Yearbook of New York's Newspaper Men and Women