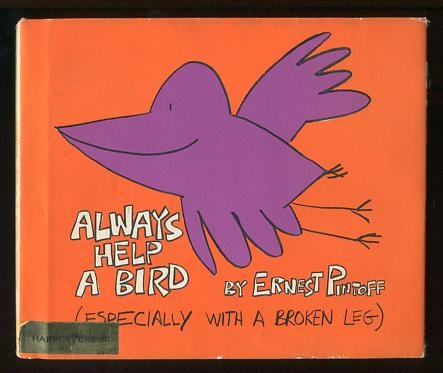 Always Help a Bird (Especially With a Broken Leg)

[a nice clean book, very light wear to extremities; jacket a little worn along bottom edge, "HarperCrest" gold-foil label at lower left corner of front panel, a little edgewear at front flap foldover]. How a "girl and boy rescue [an injured] bird -- and the part their mother plays in the bird's recovery -- are amusingly presented in this fresh and buoyant book." The first (and I believe only) children's book authored by Pintoff, a prolific television and occasional film director whose most enduring work is a group of five animated short films produced between 1957 and 1963, the last of which, THE CRITIC, earned him an Academy Award. This book is very much in the vein of those films, a simple but utterly charming story with illustrations so simple as to be almost crude, but which nonetheless beautifully express the emotions of the characters.

Title: Always Help a Bird (Especially With a Broken Leg)

Illustrator: Illustrated by the author

Always Help a Bird (Especially With a Broken Leg)