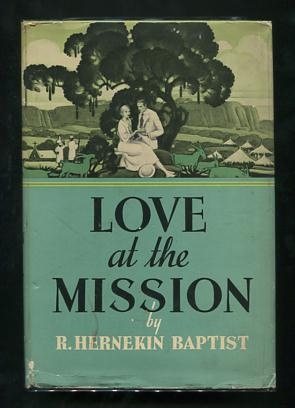 Love at the Mission

[ex-department store library book, but marked as such only by multiple small library and "withdrawn" stamps on both pastedowns and endpapers, and with so little wear as to suggest that nobody ever actually checked it out and read it; the jacket is a bit edgeworn, with a few small tears, a rough surface-peeled spot near base of spine, a tiny stain on the front panel, and a vintage price-sticker (from City of Paris, San Francisco) on the rear flap]. "To the three rapidly maturing daughters of Pastor Oguey, isolation in a small mountain parish in South Africa meant the slow, relentless frustration of all the natural impulses. Mr. Baptist lives in South Africa. Because he knows its power over white men, he makes the reader feel the primitive, inscrutable, relentless strength of the African country almost as a visible presence." The book's essential topic is "the problem of miscegenation, but only of the mind" (as a contemporary reviewer put it), as the eldest of the three daughters "feels that terrible things have happened to her in her thoughts," and is determined to save her younger sisters from what was once melodramatically called "a fate worse than death." Unfortunately, her "twisted and thwarted and frustrated thinking," combined with the abstraction of her remote, scholarly father (who's engrossed in translating the Bible into the native language), eventually drives her mad. All the jacket blurb offers about the author is that "he lives in South Africa." That much was true, except for the "he" part: "R. Hernekin Baptist" was actually a pseudonym used by Ethelreda Lewis (most famous as the "as told to" author of the "Trader Horn" memoirs) for a handful of novels she wrote during the 1930s, of which this was the last. (She died in 1946.) Her previous "Baptist" book, "A Cargo of Parrots," had been a finalist in a novelette contest sponsored by Little, Brown & Co. in 1937.

Title: Love at the Mission

Love at the Mission