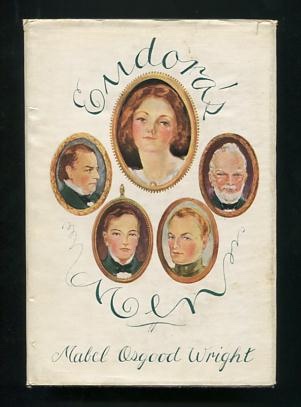 [nice tight clean book with minimal wear, jacket lightly soiled, slightly worn at spine ends, a few tiny closed tears at edges]. Somewhat sprawling quasi-historical novel, spanning more than sixty years in the life of a New England family's matriarch (the Eudora of the title), from watching "her young husband swept into the maelstrom" of the Civil War, through helping her grandson overcome his "lethargy and sickness of soul" following World War I. Mabel Osgood Wright (1859-1934) was known for her involvement in the Audubon movement and for her extensive writings about nature and outdoor life -- but she also had a more or less concurrent career as a novelist (initially under the pseudonym "Barbara"). This would appear to have been her last published book.