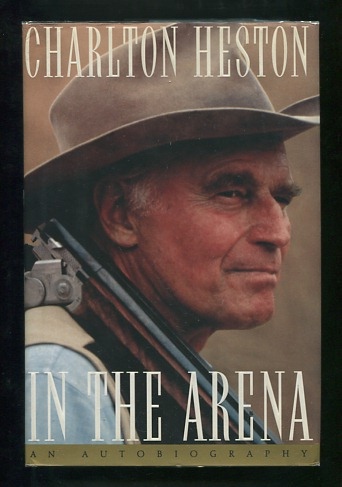 [tiny bump to bottom front corner, otherwise the book is essentially as-new; jacket shows faint wear at a couple of corners, the slightest bit of dog-earing at top of spine]. (B&W photographs) INSCRIBED "To Dick ... who helped make it happen / Thanks!" and SIGNED ("Chuck") by the author on the title page. Autobiography of the legendary granite-featured actor, inscribed to director Richard Fleischer, who directed Heston in two feature films, the sci-fi classic SOYLENT GREEN (1972) and the period adventure CROSSED SWORDS (1977), an adaptation of Twain's "The Prince and the Pauper" (Chuck played Hank the VIII). Heston also had a small off-screen role (as the voice of an alien visitor) in Fleischer's last film, a 29-minute short entitled CALL FROM SPACE (1989). Signed by Author

Title: In the Arena: An Autobiography [*SIGNED* association copy]