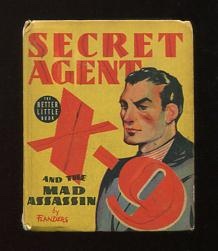 (stiff card covers) [binding intact, with only modest external wear, mostly in the form of the bumped and worn corners that BLBs are prone to; unfortunately the front cover has been somewhat blemished by some misguided, pencil-wielding child (I assume) who has inserted a single line inside each of the letters on the cover]. (The Better Little Book, No. 1472) Series Better Little Book adaptation of "the Famous Detective Strip," which had the distinction of being created (in 1934) by Dashiell Hammett, and originally drawn by Alex Raymond. Both departed the strip early on, however, and among the succession of folks who continued the strip was artist Charles Flanders, whose work illustrates this particular episode. (According to Wikipedia, "Robert Storm" was a King Features house pseudonym; judging from the example at hand, "he" was no Hammett.)