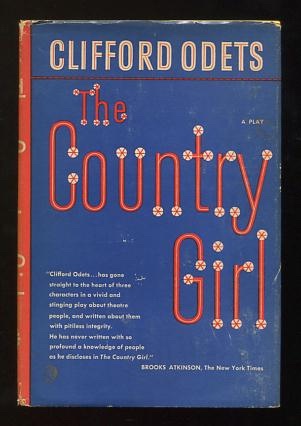 The Country Girl; a play in three acts

[a bit of wear to bottom edges of covers, page edges a little age-toned, one diagonally-creased upper page corner; jacket shows some wear along top and bottom edges, light spotting/rubbing to front panel]. Drama about a has-been alcoholic actor whose life and career are redeemed by the faith and loyalty of his wife and his stage director. Basis for the 1954 film of the same name starring Bing Crosby, Grace Kelly, and William Holden; it's also been revived several times (both on Broadway and off-Broadway), and adapted twice for TV. (The lead in the original 1950/51 Broadway production was Paul Kelly (no relation to Grace) -- a fact that, astonishingly, goes completely unmentioned in Kelly's Wikipedia writeup. Why "astonishingly"? Look up Kelly's biography and you'll see what I mean. Short version: he once killed a guy while drunk, for which he served a couple of years in San Quentin.)

Title: The Country Girl; a play in three acts

The Country Girl; a play in three acts