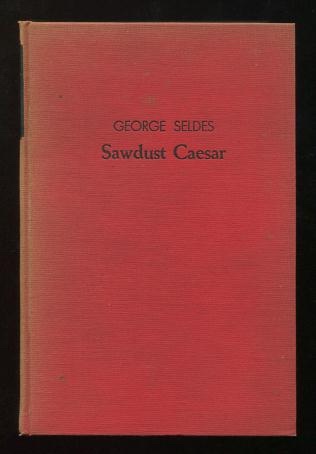 (no dust jacket) [good sound copy, spine cloth faded, light soiling to covers, light age-toning to edges of text block, tiny rip in cloth at top of spine]. Political biography of Benito Mussolini's life and rise to power. Seldes, an investigative reporter in a day before that term existed, had some considerably history with Il Duce: in the early 1920s Seldes had been sent to Italy by the Chicago Tribune, and "first knew Mussolini as a fellow but rather violent journalist," as he writes in his foreword. He reported extensively on the political scene in Italy, and one particular piece -- about the murder of Socialist politician Giacomo Matteotti, who was kidnapped and slain by Fascists (whether upon Mussolini's direct order is still a matter of debate) just a few days after speaking out against their party -- got Seldes booted out of the country in 1925. He wrote an account of Italian censorship and intimidation of American reporters for Harper's Magazine in 1927, and made a secret return to Italy in 1931 while preparing this book for publication; it was, in fact, completed and ready to go to print that year, but both the British and French governments prevented its publication, so as to maintain their then-friendly relationship with the Italian Fascist government. Although the author maintained that he held no grudge against Mussolini, his portrait of the dictator is nonetheless quite scathing; as the New York Times critic rather drolly put it, "neither privately nor publicly does Mr. Seldes's examination redound to Mussolini's credit." Seldes also had no truck with most of the other Mussolini "biographers" of the day, characterizing much of their fawning output as "the sort of genuflectual claptrap, romantic moonshine, and suggestio falsi written by hand-kissed women," but allowed as how "the gentlemen are little better." The endpapers of the book (the front being different from the back) present a photo-montage of various images of Mussolini, and the book includes a detailed chronology of his life and reign; there are also no fewer than 16 appendices, including numerous official statements of Fascist policies, and a bibliography.

Title: Sawdust Caesar: The Untold Story of Mussolini and Fascism