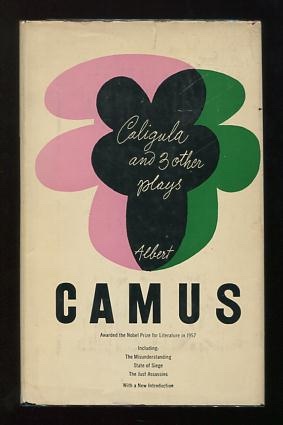 Caligula & Three Other Plays [The Misunderstanding; State of Siege; The Just Assassins]

By: Camus, Albert (translated from the French by Stuart Gilbert)

[nice clean book, tiny bump to top front corner, faint soiling to edges of text block; jacket lightly soiled, one short tear at top of front panel, looks like it's been very shallowly nibbled by bugs along the top and bottom edges and at the rear flap foldover]. "The first complete publication, in English, of Albert Camus's major work as a playwright before 'The Possessed.' All four plays are the superb stage pieces one would expect of a versatile man of the theater -- Camus was an actor, director, and adapter as well as a playwright -- and each testifies to the intense and lucid concern with moral problems characteristic of his more familiar fiction and essays." The publication of this collection was no doubt influenced by Camus's winning of the Nobel Prize for Literature in 1957, a fact blurbed on the front of the jacket. All of these plays have been adapted for film and/or TV numerous times, in numerous countries.

Title: Caligula & Three Other Plays [The Misunderstanding; State of Siege; The Just Assassins]

Author: Camus, Albert (translated from the French by Stuart Gilbert)

Caligula & Three Other Plays [The Misunderstanding; State of Siege; The Just Assassins]