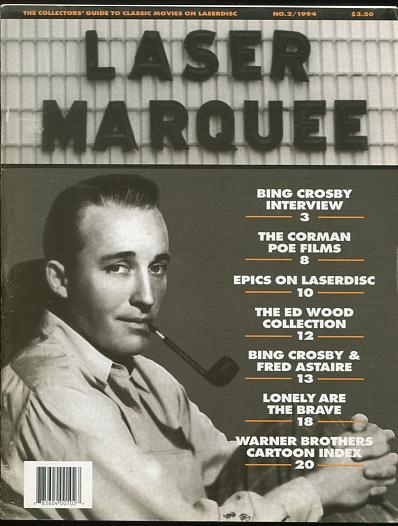 [minor creasing along right edge of front cover, no other significant wear]. (B&W photographs, ads) The second (and possibly final) issue of this short-lived periodical, pitched as "the collectors' guide to classic movies on laserdisc" -- although "ill-timed" might be a better descriptor than "short-lived," since by 1994 the handwriting was already on the wall for the laserdisc: the DVD format was introduced the following year. About half of this magazine's 24 pages (including covers) is devoted to lists of recent releases, with the only really substantive content being a 5-page interview with Bing Crosby, conducted by Mel Neuhaus in 1976 and apparently published here for the first time. (Or at least no information is given here about any prior publication.) Also covered (with brief reviews) are notices of recent laserdisc releases: four Roger Corman's Edgar Allan Poe-based films; three films directed by Edward D. Wood Jr.; seven films starring either Fred Astaire or Bing Crosby (or both), along with brief guides to the availability of each man's films on laserdisc; and LONELY IS THE BRAVE, starring Kirk Douglas. There is also an alphabetical index of Warner Bros. cartoons, indicating which laserdisc collection(s) each title can be found on.