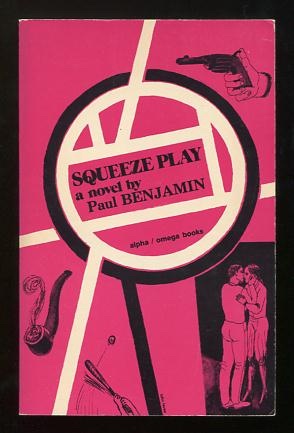 [nice tight clean copy, with just a touch of wear at the extremities]. Trade PB Auster's first novel, a crime yarn "in the tradition of Raymond Chandler and Dashiell Hammett" (because, of course), about a former baseball star whose political ambitions are complicated by his entanglement with a shady private detective. This, the true first edition (preceding the much more common 1984 Avon mass-market paperback that's frequently mis-identified as the first), was published pseudonymously but not ambitiously so -- after all, Benjamin is just his middle name -- and appeared the same year as Auster's first prose book, the memoir "The Invention of Solitude," and a few years before he really broke through into the realm of literary fiction with "City of Glass," the opening installment of his New York Trilogy. In a later (1996) memoir, the author disdained "Squeeze Play" as "an exercise in pure imitation" (of Chandler and Hammett, no doubt) and a few years later stated that he'd written the book "to make money, that’s all [and that it's] not a legitimate book.” Though the book is likely to forever remain the bastard stepchild of Auster's literary oeuvre, one close reader/critic has observed that "some of his trademarks come through on the page," and that the relationship of one of the novel's characters with his ex-wife and their young son "has a distinct autobiographical tilt." (Auster and his first wife were divorced in 1977; the novel was written during the summer of the following year.) This edition is exceedingly scarce, issued (one presumes) in a small print run by an independent publisher whose primary focus was not on fiction. OCLC records only five copies, all in American libraries.