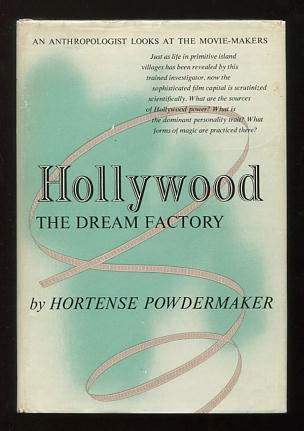 Hollywood, the Dream Factory: An Anthropologist Looks at the Movie-Makers

[no significant shelfwear to book, but with small rust-stains (from paper clips?) at top and bottom edges of both endpapers; jacket shows light surface wear, with a long vertical wrinkle/crease in rear panel, short closed tear (all but invisible) at lower rear hinge]. A renowned "lady anthropologist who has perfected her investigative technique among primitive cultures" turned her sights on the movie capital, "a place of ritual, a place where the secrets of power are of magical significance, a place where superstition, sex and money mingle, where human values are distorted and sometimes lost." The author did her field work in Tinseltown, under the sponsorship of the Viking Fund, during 1946 and 1947, while she was a part-time visiting professor at UCLA; she describes her research technique at length in the book's introduction, comparing and contrasting it to her earlier work among Pacific South Sea islanders -- at one point evoking the native peoples' classification of the Hollywood movies they'd seen into two categories: "kiss-kiss" and "bang-bang." (Did Pauline Kael credit Powdermaker, I wonder, for supplying her with the title for the second volume of her collected film criticism?) A fascinating read even today, especially in tandem with Leo Rosten's somewhat less rigorous 1941 study "Hollywood: The Movie Colony, the Movie Makers." Uncommon in such nice condition, the thin-paper dust jacket being especially prone to wear and tear.

Title: Hollywood, the Dream Factory: An Anthropologist Looks at the Movie-Makers

Hollywood, the Dream Factory: An Anthropologist Looks at the Movie-Makers