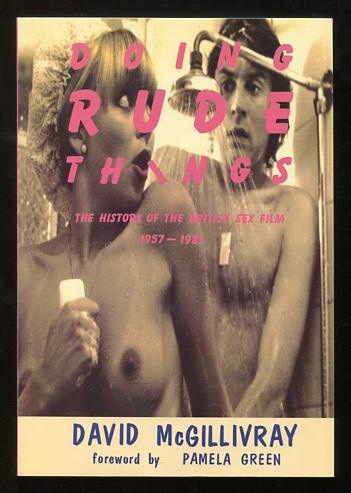 [a nice clean copy, with just a teensy bit of surface wear to covers]. Trade PB (B&W photographs) "In darkest Britain, the only form of sexual entertainment generally available has been of the soft core variety, but for nearly 25 years it just about drove the populace to distraction. While a minority of moralists cursed the sex film as the harbinger of a tidal wave of filth, the majority of the male population and a good percentage of curious females turned it into the most lucrative speculation the British film industry has ever enjoyed." The author confesses: "If it seems extraordinary that anyone should want to write about sex films that were not only badly made but also, as often as not, unsexy, I can only submit that it is this very contradiction that fascinates me, just as horror films that are not frightening and melodramas that are not exciting are now inspiring other books." The Foreword is by Pamela Green, described in the text as "the most famous British nude of the Fifties, Britain's answer to America's Betty [sic] Page." Approximately the last one-third of the book is devoted to brief biographies of many of the actors and filmmakers who worked in the genre; this appendix is entitled "The Main Instigators and What Became of Them."