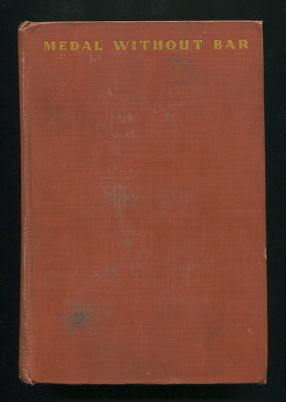 (no dust jacket) [ex-rental library book with various stamps and a small label remnant on the ffep, minor bumping and light wear to extremities, moderate external soiling, a bit of wear along front joint]. A highly-regarded novel of the First World War, considered one of the first major works to be based on an author's personal combat experiences. Blaker (1893-1940), a Second Lieutenant in the Royal Field Artillery during the war, was gassed while serving as a forward observer and never fully recovered. Although he turned out a dozen or so books in the 1920s and 1930s and even did a bit of screenwriting (although apparently without ever achieving an on-screen credit), he's has fallen into such obscurity that he rates neither a Wikipedia page nor an entry in the Oxford Dictionary of National Biography. (Regarding his screenwriting: I deduce this from the presence of "film scripts and scenarios, with related notes" in his papers, housed at Oxford's Bodleian Library. Although I haven't uncovered any produced films bearing his credit, it's worth noting that he died in Los Angeles, and his Variety obit noted that his last screen assignment had been at the Goldwyn Studios.)