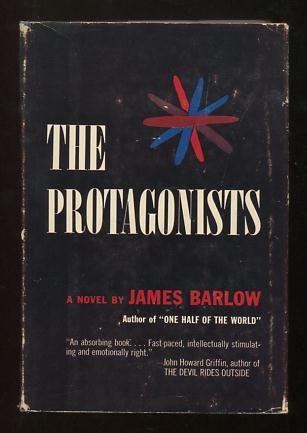 (price-clipped) [minor shelfwear to bottom edge, tiny dent in top of rear cover; jacket moderately scuffed and edgeworn, light soiling to rear panel]. Sort of a Rashomon-style murder mystery, with the story told three times, each from the perspective of a different character: a woman who is seduced and then murdered; her killer (whose p.o.v. is descibed as that of "the self-centered, sex-ridden pride of the all-conquering male"); and finally as revealed to the police superintendent who investigates the murder. The author adopts a different narrative voice for each section of the book, mostly chillingly in the second part, entitled "Criminal," which is told in the first person. (The book lacks an edition/printing statement, and bears only a 1956 copyright date -- actually its original publication date in England. It was Barlow's first book, although it wasn't published in America until March 1958, a year after his subsequent novel, "One Half of the World.")