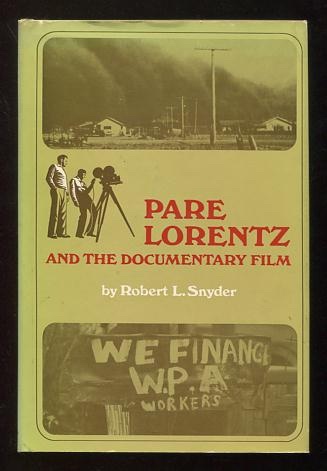 [light shelfwear, a handful of tiny white-paint stains on bottom edges of covers (probably due to the book's have been placed on a newly-painted shelf before the paint had thoroughly dried); the jacket appears to be somewhat unevenly color-shifted on the front panel and spine, and has a small ragged tear at the top of the rear panel]. (B&W photographs) INSCRIBED and SIGNED on the ffep by composer Virgil Thomson, to film producer Richard Goldstone: "for Richard Goldstone / a Lorentz graduate / from another one / and now you and I have / worked together / a privilege and a pleasure / Virgil Thomson / Hollywood / 21 May 1970." (See notes below.) A history and analysis of the three groundbreaking documentary films made for the U.S. Government by Pare Lorentz during the Great Depression, about "the pressing problems facing the nation -- drought, flood, poverty, and slums." The films, the first made by the government for distribution to the general public, were: THE PLOW THAT BROKE THE PLAINS (about the Dust Bowl); THE RIVER (an account of the devastation caused by flooding of the Mississippi River, and how it was ameliorated by the establishment of the Tennessee Valley Authority); and THE FIGHT FOR LIFE (about the dangers posed to the health and lives of pregnant women by urban poverty). More broadly, the book discusses the establishment of the U.S. Film Service (with Lorentz as its director), and the political opposition it engendered -- not unlike the problems National Public Radio faces today. Regarding the inscription: there are numerous index entries in the book for Thomson, who composed the musical scores for both THE PLOW THAT BROKE THE PLAINS and THE RIVER -- his earliest work for a medium to which he only infrequently applied his talents. While Thomson's association with Lorentz is clear and documented, however, the Goldstone connection isn't apparent: there is nothing obvious in his career arc (MGM Short Subjects Department, 1935-1942; feature film producer at MGM, RKO and elsewhere after WWII service in the Signal Corps) that would suggest an association between him and Lorentz, let alone explain Thomson's reference to him as a "Lorentz graduate." Similarly, I can find no point of shared credit to account for Thomson's comment about he and Goldstone now having "worked together," ca. 1970 (unless of course it refers to something outside the realm of actual filmmaking). So we can only attest to the provenance (the book was purchased from Goldstone's estate), and will leave the documentation of the association to some future researcher. Signed by Notable Personage, Related