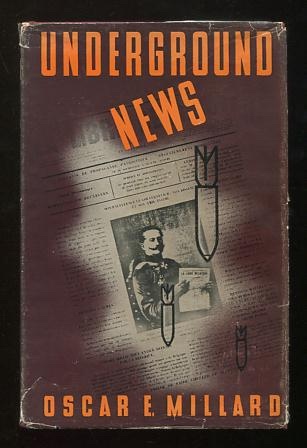 Underground News: The Complete Story of the Secret Newspaper that Made War History

[good sound copy, light shelfwear, very slight bumping to a couple of corners, generic vintage bookplate on front pastedown (with one-time owner's name blacked out); fold-out map in excellent condition; jacket is edgeworn, small tears at most corners, small puncture-wound in spine, shallow paper loss at top of spine]. (B&W photographs, fold-out map) The history of "La Libre Belgique," an underground journal operated by a group of Belgian patriots during the German occupation of their country during World War I. "Started soon after the Germans had closed down all the Belgian newspapers, it was one of the best kept secrets of the Great War," and is told here in "a powerful and dramatic account [using] facts which have been obtained by the author from the actual heroes of the enterprise." Originally published in England under the title "Uncensored," it was filmed under that title in 1942; after the war the British-born author emigrated to Hollywood, where he established himself as a film and television writer of some note, with feature film credits including THE FROGMEN, ANGEL FACE and THE CONQUEROR.

Title: Underground News: The Complete Story of the Secret Newspaper that Made War History

Underground News: The Complete Story of the Secret Newspaper that Made War History