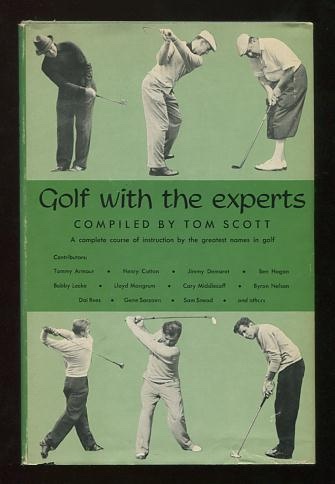 Golf with the Experts [*SIGNED* by "The Hogans" (see note)]

(price-clipped) [very light wear to the extremities, a nice solid copy; jacket has an itsy-bitsy chip at bottom of front panel, small tear at lower rear hinge, another small closed tear and associated creasing at bottom of rear panel]. (B&W photographs) "A complete course of instruction by the greatest names in golf," an anthology of previously-published pieces on all aspects of the game. The greatest of the great names, of course, was Ben Hogan, represented here by an excerpt on "Clubs--Selection and Use" from his book "Power Golf." What makes this particular copy of this not-especially-rare golf tome notable is the inked gift inscription on the ffep, which reads: "To Bill - our / dear friend from / The Hogans / Xmas '64." The handwriting *somewhat* resembles numerous examples of Ben Hogan's autograph, although I strongly suspect that this inscription was actually written by Valerie (Mrs. Ben) Hogan; it's just the sort of thing that a faithful and dutiful wife would write, representing the couple when the famous husband couldn't be bothered to pick up a pen himself. (Or maybe that's just the sort of thing he preferred to delegate to the Mrs., since there's plenty of evidence that he was not, himself, a reluctant signer of autographs.) (The provenance of the book, unfortunately, sheds no light on who the recipient, "Bill," might have been.) While this obviously isn't as cool as a book signed by Hogan himself would be, I think a reasonable case can be made for Valerie as a kind of "celebrity golf wife," given that she's probably the only famous golfer's wife to have been portrayed in a major Hollywood movie (by Anne Baxter in the 1953 biopic FOLLOW THE SUN, opposite Glenn Ford as Hogan). She was married to Hogan from 1935 until his death in 1997 and, as depicted in the movie, supported him faithfully through all his travails, including their near-fatal car accident in 1949.

Title: Golf with the Experts [*SIGNED* by "The Hogans" (see note)]

Golf with the Experts [*SIGNED* by "The Hogans" (see note)]