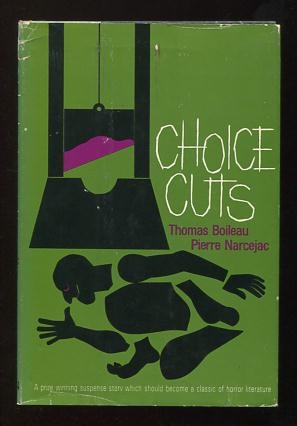 By: Boileau, Thomas [sic], and Pierre [sic] Narcejac (translated from the French by Brian Rawson)

(price-clipped) [a good solid copy with minimal wear, but some unsightly foxing to the top edge of the text block; jacket moderately edgeworn, mostly along top and bottom edges]. Blackly humorous novel about a condemned murderer who donates his body to science -- mad science, as it turns out, since he's diced up, post-mortem, and seven different parts of his body end up re-attached to seven very different people. Hilarity (of a very dark sort) and horror ensue. This authorial team was responsible for the books on which the great films DIABOLIQUE and VERTIGO were based, but alas the screen adaptation of this particular novel was made by a filmmaker whose talent was a magnitude less than that of Henri-Georges Clouzot and Alfred Hitchcock, whose names I will not sully by mentioning that other guy in the same sentence. (Look up the movie if you're interested -- it was called BODY PARTS (even the title was uninspired!), and was released (or escaped) in 1991. There actually had been an earlier film version planned, circa 1967, for which James Bridges had done a screenplay, but it never came to fruition.) By the way, to explain those "sic" notes: in an act of consummate sloppiness by the publishers, this edition of the book transposed the names of the authors, Pierre [not Thomas] Boileau and Thomas [not Pierre] Narcejac. Considering how well-known they were, this would be roughly equivalent to an m.c. introducing a certain famous comedy duo as "Oliver Laurel and Stan Hardy."