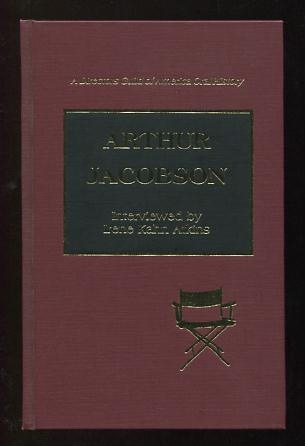 (no dust jacket, probably as issued) [tight and clean, with no discernible wear; one-time owner's address label on ffep]. (The Directors Guild of America Oral History Series, No. 11) Series (B&W photographs) INSCRIBED and SIGNED by the interview subject on the 2nd ffep: "To my dear friends / _____ & ____ / Affectionately, / Artie." (The inscription and signature are in a somewhat shaky hand, but after all he was about 90 years old when the book was published, and died just a couple of years later.) Extensive interview with a veteran assistant director (who actually started out as a cameraman) whose career stretched over six decades, from 1918 to 1970. During the studio era he worked largely at Paramount and then 20th Century-Fox; among the many directors for whom he worked were Frank Borzage, William Wellman, Dorothy Arzner, John Cromwell, Josef von Sternberg, Wesley Ruggles, George Seaton, and Henry Hathaway. (An entire chapter is devoted to his work with Hathaway, another with George Seaton and William Perlberg at Fox.) He was also one of Clara Bow's boyfriends, and as Bow biographer David Stenn explains in the introduction to this volume, was an invaluable source of information about her. Signed by Biographee