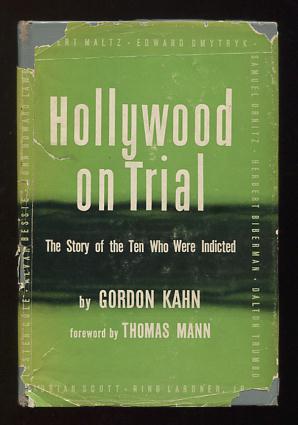 Hollywood on Trial: The Story of the 10 Who Were Indicted

[decent sound book, moderate wear to extremities, light soiling and age-toning to edges of text block; jacket heavily chipped at and around spine ends, paper loss at several corners, old internal masking-tape repairs to various tears/splits, all in all kind of a mess]. "What were you doing on September 13, 1947? On that day some of Hollywood's most distinguished authors, stars, directors and producers were commanded to appear befor the House un-American Activities Committee in Washington where they and the pictures they produced were charged with being 'subversive.'" Those hearings resulted in the indictment and ultimate imprisonment of ten men for contempt of Congress -- which of course was the only appropriate response under the circumstances. The book was written "in full collaboration with the ten indicted men [who] assume responsibility for their statements in this book." The introduction is by Thomas Mass; the copyright, interestingly, is in the name of Herbert Biberman, one of the Ten. Issued simultaneously in hardcover and paperback editions; jacketed copies of the hardcover are relatively uncommon, probably because the cheaply-produced jacket didn't wear well (as this example shows!). The jacket is now in a protective cover, a fact I wouldn't ordinarily note because the jackets on ALL books we sell are thus protected -- but I just thought you might like the reassurance that this particular poor baby is safe from further depredations.

Title: Hollywood on Trial: The Story of the 10 Who Were Indicted

Hollywood on Trial: The Story of the 10 Who Were Indicted