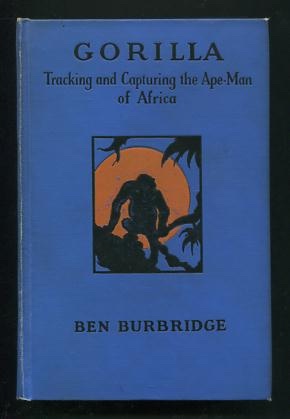 Gorilla: Tracking and Capturing the Ape-Man of Africa

(illustrated cloth; no dust jacket) [a touch of wear to all corners, some age-toning to edges of text block, bookplate of Hollywood writer-producer Carey Wilson on front pastedown; small tear in fore-edge of title page]. (B&W photographs, endpaper maps) A photo-illustrated account by a Florida-based real estate mogul-cum-great white hunter and sometime filmmaker, of an expedition/safari he made into the Congo in 1924/25, with two purposes: (1) to capture a number of gorillas, for placement in various zoos; and (b) to take motion picture footage along the way. As a film director, Burbridge (per IMdB) has exactly two credits: THE GORILLA HUNT (1926, the film that resulted from this particular safari) and KIDNAPPING GORILLAS (1934). (The former has been noted as the first such film to actually be shot in Africa (as opposed to, say, Griffith Park), although it's always a good idea to take such claims with a grain of salt.) As a "documentary filmmaker's narrative," however, the book is somewhat lacking; although the author makes intermittent references to "setting up the camera and taking some pictures," he's obviously far less interested in discussing (or even thinking about) his cinematic aesthetic than he is in (a) finding the gorillas, and (b) shooting a bunch of other animals on the way to the gorillas. Oh, and dealing with the "natives" with a typical white-man-among-the-savages attitude. The photographs that illustrate the book, in fact, are almost evenly divided between shots of animal carcasses and photos of the various indigenous peoples he encounters along the way (as well as those in his own safari-party, which altogether was about 125 people). If you can get past the slaughter and the racism, the book has a fair amount of both ethnographic and zoological interest, particularly when Burbridge actually does reach gorilla country and has some interesting observations to make about the animals' behavior. (Admittedly, he's no Dian Fossey, but still.) In the end, according to a report in the New York Times, the expedition brought four young gorillas out of the jungle: two died on the return journey, one was delivered (as contracted) to a zoo in Antwerp, and the fourth, dubbed "Miss Congo," was brought back to New York and eventually ended up living on Burbridge's brother's farm in Florida; she was purportedly the first gorilla in human captivity, and as such was both a public curiosity and a subject for serious scientific inquiry.

Title: Gorilla: Tracking and Capturing the Ape-Man of Africa

Gorilla: Tracking and Capturing the Ape-Man of Africa