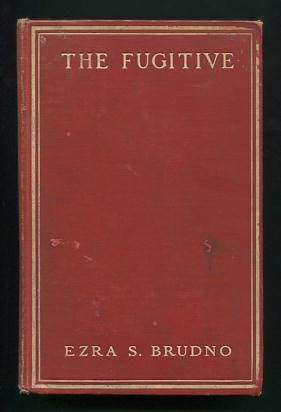 The Fugitive: Being Memoirs of a Wanderer in Search of a Home

(no dust jacket) [ex-church library book, property label on front pastedown (William M.E. Sunday School); considerable external wear/soiling, rear hinge cracked, spine lettering faded, etc.; a reading/reference copy, no more]. Never heard of Ezra S. Brudno, and have no idea why his "memoirs" might be of interest? Me neither! But Wikipedia, bless 'em, enlightened me on both scores: "Brudno was born in Valozhyn (present-day Belarus) in 1877. His parents were Isaac Brudno and Hannah Model. [The book is dedicated to a "Dr. Emil M. Brudno."] His family emigrated to the United States in 1891 where they settled in Ohio. He attended Adelbert College and Yale University where he obtained a law degree. He began practicing in Cleveland in 1901 and in 1909 became an assistant district attorney. During his law practice he started to write. His first novel called The Fugitive was published in 1904. His literary efforts were published in Lippincott's Monthly Magazine and locally in the Jewish Review & Observer. In his writings he portrayed Judaism and Jewish culture as having little value and promoted the assimilation of Jews into western civilization." This was his first book, and seems to generally parallel the author's own experiences under Czarist rule in Russia (hence "memoirs," although it's a work of fiction). The New York Times reviewer sniffed that it "may be considered sociologically interesting beyond the measure of its literary value, which is not great," but the L.A. Times critic found it "full of dramatic incident, and absorbingly interesting to one who loves a human document."

Title: The Fugitive: Being Memoirs of a Wanderer in Search of a Home

The Fugitive: Being Memoirs of a Wanderer in Search of a Home