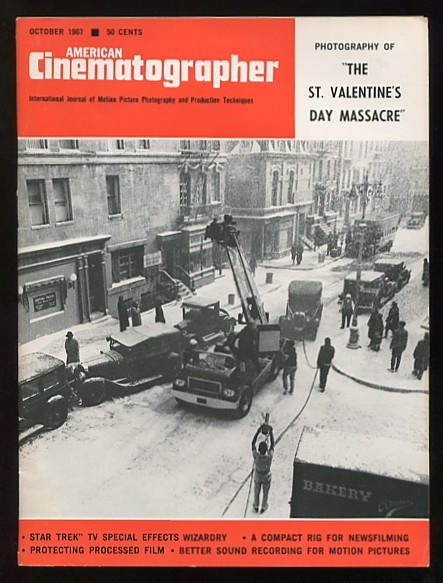 [very nice copy, minimal wear, light age-toning at page edges; no subscription label or other markings]. (B&W photographs, ads) Monthly magazine of the American Society of Cinematographers, a very technically-oriented publication with plenty of information (articles and advertisements) related to the latest equipment, technical processes and production techniques then in use in the Hollywood motion picture industry. The cover story and primary article is a 4-page piece, illustrated with numerous photographs, about the filming of THE ST. VALENTINE'S DAY MASSACRE, directed by Roger Corman and photographed by Milton Krasner -- which was, as the article details, shot not at all in its Chicago settings but entirely on sound stages and street sets at 20th Century-Fox and M-G-M. Perhaps of greater interest in retrospect, however, is the other behind-the-scenes production article, entitled "Out-of-this-world Special Effects for 'Star Trek'," in which their companies' individual contributions to the show are discussed by three of the top special-effects experts in the business -- Howard A. Anderson, Linwood G. Dunn, and Joseph Westheimer -- who "worked separately but in a spirit of cordial collaboration to produce some of the most stunning and literally 'far out' visual effects ever to be recorded on color film."