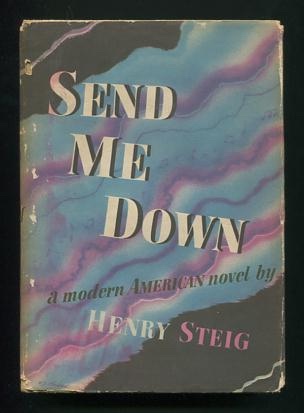 [light shelfwear, red marker line on ffep, tiny stain on fore-edge; jacket edgeworn (with several small holes along rear foldover and front hinge), browned at spine, shallow chipping at spine ends, miscellaneous other small nicks and rubbed spots]. "The story of two brothes who grow up in New York and study music the way millions of other kids do, but develop the peculiar genius which eventually brings them into the world of jazz. ... One of the brothers becomes a great band leader, a fashionable and fabulously successful 'king of swing.' The other enters its underworld of 'hot' hazz musicians. One becomes a respectable citizen, frustrated by the lure of big money and publicity, while the other remains an improvident Don Juan." The author, per his jacket bio, was a brother of cartoonist William Steig, and was himself a professional jazz musician from 1922 to 1932; this, his first novel, purports to be "the only one about jazz music so far written by a jazz musician."

Title: Send Me Down