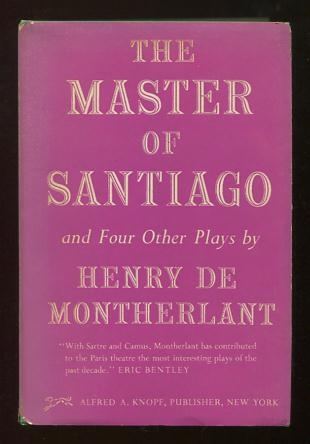 The Master of Santiago, and Four Other Plays

By: de Montherlant, Henry (translated from the French, with a Preface, by Jonathan Griffin)

[a touch of fading to cloth at base of spine, dust-soiling to top of text block, previous owner's signature (Sanora Babb, American poet-novelist) on ffep, with her occasional pencil check-marks in margins; jacket faded at spine, a little paper loss at spine extremities, light soiling and corner-wear]. "One of the foremost dramatists of contemporary France, as well as a novelist and polemicist of intense power, [the author] is a figure of perennial controversy. Now for the first time five of his most successful and important plays have been translated into English ... in textually complete versions supervisied by Montherlant." The five are: "Queen After Death, or How to Kill Women" ("La Reine morte"); "Malatesta"; "No Man's Son, or More Than Blood" ("Fils de personne"); "Tomorrow the Dawn" ("Demain il fera jour"); and "The Master of Santiago" ("Le Maître de Santiago").

Title: The Master of Santiago, and Four Other Plays

Author: de Montherlant, Henry (translated from the French, with a Preface, by Jonathan Griffin)

The Master of Santiago, and Four Other Plays