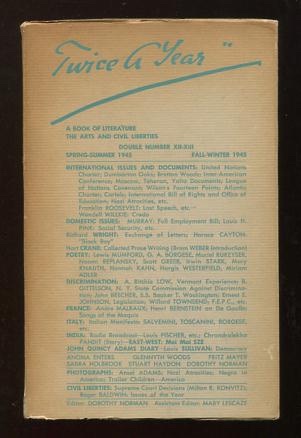 Twice a Year: A Book of Literature, the Arts, and Civil Liberties (Double Number XII-XIII, Spring-Summer 1945 [and] Fall-Winter 1945)

(stiff cardboard covers with attached flaps) [moderate edgewear to covers, spine browned, some dog-earing at top of spine]. (B&W photographs) An incredibly ambitious semi-annual (or in this case, annual) periodical containing a broad range of reports, articles, letters, poetry, photographs, etc., on numerous topics both American and international. This particular issue is 564 pages long and over an inch thick, and an substantial amount of its bulk is devoted to documents relating to the end of World War II, including reports on various conferences (Moscow, Teheran, Cairo), surrender documents, United Nations declarations, and so on. There is an official report on "Buckenwald Atrocities," illustrated by a U.S. Signal Corps photo of concentration camp prisoners murdered by the Nazis. There is also a lengthy section on racial discrimination in the U.S., and a selection of the prose work of Hart Crane. There's far too much to even summarize, in fact, but a sampling of the contributors will give some idea of the scope: Ansel Adams (one photograph), Lewis Mumford, Richard Wright, Andre Malraux, Roger Baldwin, and Arturo Toscanini.

Title: Twice a Year: A Book of Literature, the Arts, and Civil Liberties (Double Number XII-XIII, Spring-Summer 1945 [and] Fall-Winter 1945)

Twice a Year: A Book of Literature, the Arts, and Civil Liberties (Double Number XII-XIII, Spring-Summer 1945 [and] Fall-Winter 1945)