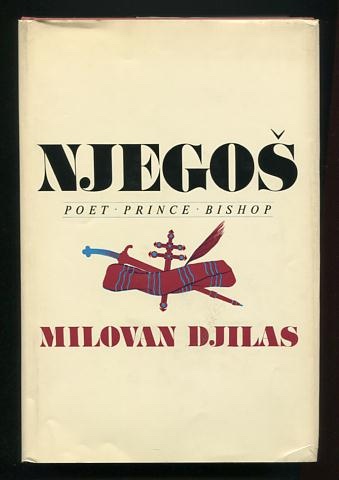 By: Djilas, Milovan (translated by Michael B. Petrovich)

[light bumping to bottom corners, otherwise a good solid copy with no significant wear; mostly-white jacket is nice and clean, with just a touch of edgewear and one small closed tear at top of rear panel, minor creasing at bottom right corner and top left corner of front panel; review copy, with publisher's slip laid in at front]. (endpaper maps) Biography of "the greatest poet the Serbian language has ever known." He was "a man of action as well as bishop and literary artist [who] ruled his country [Montenegro] from the age of eighteen until the year of his death, 1851, at the age of thirty-seven. In this role he contrinued the struggle to maintain his country's hard-won independence." Author Djilas himself, as the jacket blurb notes, had "himself become a historical figure," as a key figure in the post-World War II communist government of Yugoslavia. At one point he was next in line to succeed Tito as the country's prime minister, but his outspoken criticism of the ruling class got him expelled from the Communist Party and made him one of the most prominent anti-Stalinist dissidents in the Eastern Bloc. He spent much of the decade from 1957 until 1966 in prison, and it was while incarcerated that he completed this book; in fact he was still in prison at the time this translation of his book was published in the U.S. (He was granted amnesty and freed at the end of 1966.)