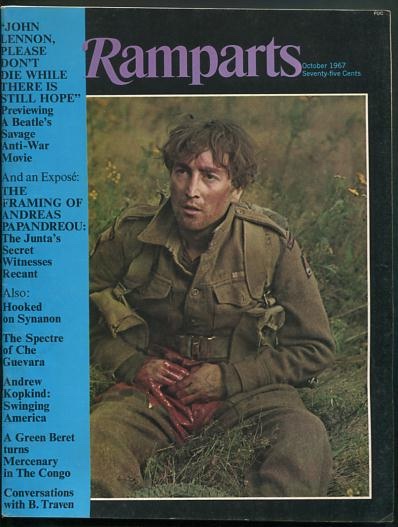 [light rubbing to covers only]. (B&W & color photos, ads, graphics) There are two items of primary interest in this issue of this erstwhile lefty publication. The first is a "Literary Supplement" featuring journalist and film critic Judy Stone's account of her meetings with the elusive and mysterious writer B. Traven in Mexico (which formed much of the basis for her book "The Mystery of B. Traven," published ten years later); also included is "A Reader's Guide to B. Traven," containing brief discussions of most of his notable novels (although oddly omitting what is unquestionably his best-known work, "The Treasure of the Sierra Madre"). Also in this issue is the cover story, a review/essay about the film "How I Won the War," described rather luridly in the cover blurb as "A Beatle's Savage Anti-War Movie" (because even "Ramparts" was smart enough to know that a Beatle on the cover would sell more magazines). Other articles include: "The Spectre of Che Guevara"; "Pacification in Vietnam" by David Welsh; "The Framing of Andreas Papandreou" by Andreas Vachliotis and Kyriakos Diakogannis; and "The House of Synanon" by Peter Collier.