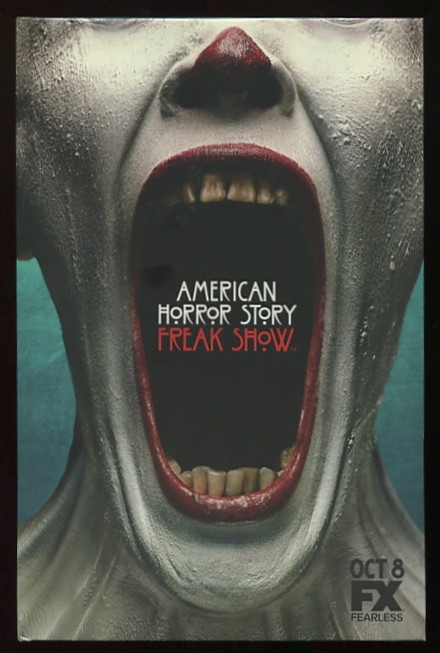 (in Near Fine slipcase) [book itself is unworn, but slightly blemished on rear endpapers from removal of spot of sticky substance; slipcase shows some external surface-rubbing]. (color photographs and graphics) Large-format (approx. 9"x13") promotional book (in slipcase), issued in advance of the premiere of the fourth season of the FX series "American Horror Story," a self-contained 13-episode mini-series set in Jupiter, Florida, in 1952, and telling the story of the struggle fo survival of one of the last remaining freak shows in America. Several pages are devoted to each of the show's major characters, including a full-page color photo of each actor in costume, and a publicity-kit-type biography of the actor; among the cast were Jessica Lange, Kathy Bates, Sarah Paulson, Michael Chiklis, and Angela Bassett. Also profiled (more briefly) are the members of the show's creative team and various FX network executives. Per Wikipedia, "Freak Show" was FX's most-watched program ever, and received a total of twenty Emmy nominations, including six for various cast members. As essentially a press kit (albeit a well-produced one), this was never offered for sale to the public. NOTE that the scanned image accompanying this listing is of the book itself, not the slipcase.