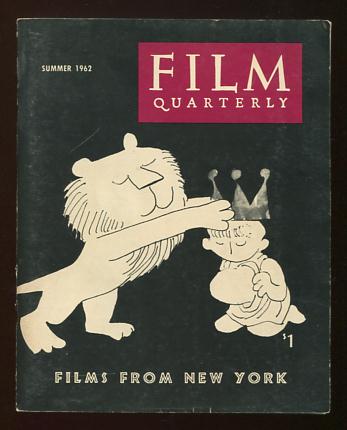 Film Quarterly (Summer 1962) [cover: drawing for OF STARS AND MEN]

[moderate edgewear to covers, mostly along spine]. (B&W photographs) Highlights of this issue: an interview with Harold Lloyd; a long article by Pauline Kael, consisting of &#34;remarks on movie critics and some recent movies,&#34; most notably Jack Clayton's THE INNOCENTS, but also taking in A VIEW FROM THE BRIDGE and WEST SIDE STORY (which is also reviewed separately in this issue by Albert Johnson), among others; a rundown on &#34;Films of the Quarter,&#34; with contributions by Kael, Stanley Kauffmann, Gavin Lambert, Dwight Macdonald, and Jonas Mekas; a section of reviews of &#34;New York films,&#34; which includes both &#34;pro&#34; and a &#34;con&#34; reviews of Shirley Clarke's THE CONNECTION and a review of Jonas Mekas's GUNS OF THE TREES.

Film Quarterly (Summer 1962) [cover: drawing for OF STARS AND MEN]