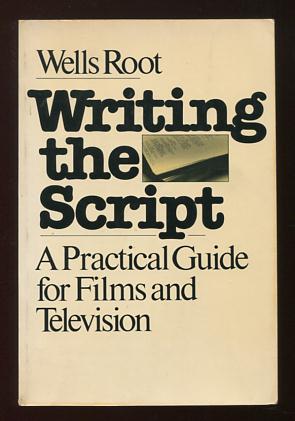 Writing the Script: A Practical Guide for Films and Television [*SIGNED*]

[very slight dog-ear at bottom right corner of front cover, soft crease along left edge of front cover, small fore-edge stain affecting the last ten pages or so]. Trade PB INSCRIBED and SIGNED by the author on the title page: "To George & Virginia -- / who are partially / responsible." "A veteran writer for films and TV, and a successful teacher of the craft, has written an essential guide to writing for the screen -- a 'how-to' book by someone who actually knows how." (Indeed, IMdB records dozens of credits for Root, dating back to the late 1920s -- although truth be told, the feature films to which he contributed are a largely unmemorable lot. He appears to have abandoned films for television from the 1950s on, and to have worked almost entirely in the Western genre: MAVERICK, BAT MASTERSON, LARAMIE, WANTED: DEAD OR ALIVE, etc. etc.) Signed by Author

Title: Writing the Script: A Practical Guide for Films and Television [*SIGNED*]

Writing the Script: A Practical Guide for Films and Television [*SIGNED*]