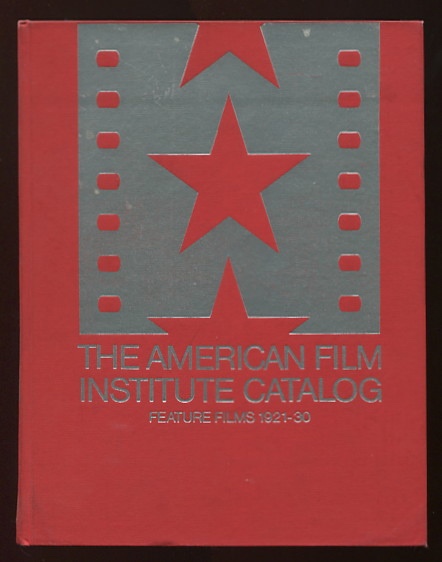 (no dust jackets, as issued) [both volumes lightly worn, slight soiling/spotting to edges of text block (mostly on top edge); front hinge on Volume 1 is a little weak, but otherwise both books are quite firmly bound; the text appears to be unmarked throughout]. The first volume produced by the AFI Catalog project, the Institute's intermittently ongoing attempt to compile credit data on all American films. Although this is still a valuable tool for researchers, with credits and plot synopses for 6,606 films, the 1920s volume (like the next one issued, covering the 1960s) suffers from comparison to the more sophisticated methodologies and guidelines that were adopted by the Catalog project after its resuscitation in mid-1980s (after almost a decade of inactivity); in particular, one misses the "Notes" sections on the individual films, and is often aware of the inadequacy of the plot synopses, given that they were based almost exclusively on published sources rather than on viewings of the films themselves, as was done whenever possible for the later volumes. (Although in all fairness, it must be remembered that the majority of films from the 1920s no longer exist, and therefore such printed sources are often the only source of information.) (PLEASE NOTE that we have adjusted the price on this heavy set of books to cover Media Mail shipping to U.S. destinations, and that NO extra shipping charges will be requested under those circumstances; for international shipping or other shipping methods within the U.S., please contact us before placing your order.)