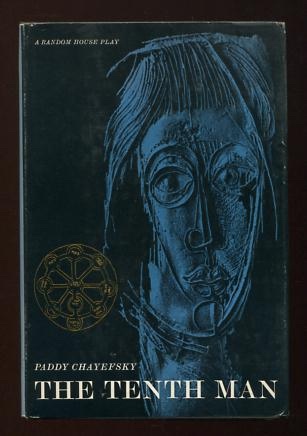 [nice tight clean copy, no significant wear apart from the teensiest bumping to the bottom corners; jacket similarly nice, with just a minor scuff mark on the spine and a tiny bit of insect-nibbling at the base of the spine; this was a review copy, and has the original publisher's slip laid in]. (B&W photographs) Chayefsky's comedy-drama about a successful young New York lawyer (and lapsed Jew) who's having suicidal thoughts after a nervous breakdown, and rather improbably finds himself in an Orthodox synagogue, where he becomes the tenth witness to an exorcism ceremony. The original Broadway production starred Donald Harron, in a cast that included Jack Gilford, Lou Jacobi, and Gene Saks; it ran for 623 performances and was nominated for several Tony Awards, including Best Play.