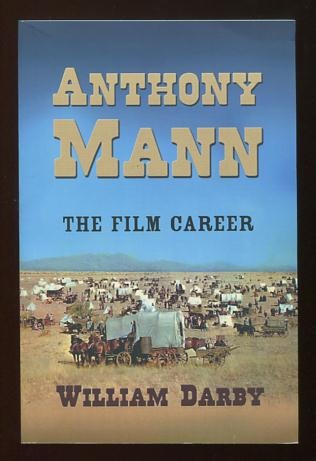 [nice clean as-new copy, with no discernible wear]. Trade PB (B&W photographs) "This detailed study of the career of Anthony Mann argues Mann's prominence and influence alongside contemporaries like John Ford. Mann (1906-1967), who was active in Hollywood and Europe, directed or produced more than 40 films, including THE FALL OF THE ROMAN EMPIRE and GOD'S LITTLE ACRE. [Seriously? Those are the two films they chose to single out in the blurb?] Best known for his work in the film noir and western genres [that's more like it!] and his films starring Jimmy Stewart, Mann later moved into Cold War and epic films." [OK, just for the record and just off the top: RAW DEAL, THE NAKED SPUR, MAN OF THE WEST, T-MEN, THE FURIES, WINCHESTER '73, THE TIN STAR, BEND OF THE RIVER -- any one of 'em a lot more watchable than GOD'S LITTLE ACRE, for my money. I'm just sayin'.]