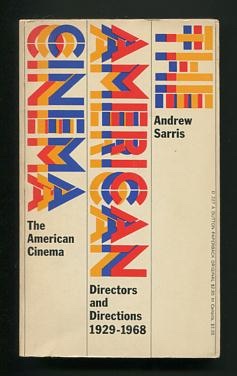 [nice copy, with minor external handling wear, brief gift inscription (non-authorial) on title page, very light soiling to bottom edges, a bit of fading to the spine lettering]. Trade PB One of the most influential and frequently-referenced (by both devotees and detractors) of all critical/historical film texts -- nothing less, in fact, than the Bible of the American branch of the Church of the Auteur. No matter what direction the later critical assessment of any given director might haven taken, for those who first encountered this book within the first decade or so after its publication it's always been nearly impossible to avoid thinking of, say, John Huston's work as "Less Than Meets the Eye," Mitchell Leisen as "Lightly Likable," or Richard Brooks as a purveyor of "Strained Seriousness." And even though Sarris himself re-assessed a number of filmmakers (both upward and downward) in subsequent years, it's worth noting that every one of the directors he placed in his "Pantheon" remains worthy of that ranking today. This particular copy, it's to be noted, apparently failed to lure its previous owner into the lap of auteurism, for it remains in virtually brand-new condition -- with an uncreased spine and nary a thumb-smudge or dog-eared page corner to be seen. [NOTE that although this is a stated "First Edition," and is also designated "A Dutton Paperback Original," there was a hardcover edition issued as well, and as far as I know there's no precedence, i.e. no "true first." But I can testify that the paperback edition was the one that EVERYBODY had, back in the day.]